What are fronts and what are the different types?

​To start learning about weather, we have to first find out what fronts are as well as what high- and low-pressure systems are.

High-pressure systems are identified as weather systems which have atmospheric pressure that decreases as you travel away from the center. 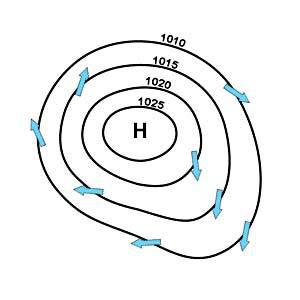 Credit: Meteoblue
Low-pressure systems can be identified as weather systems which have atmospheric pressure that increases in value as you travel away from the center. The region where two different air masses meet is often precipitation will form. Often times, precipitation will form along, ahead of, and sometimes behind fronts.

Credit: University of Illinois Urbana-Champaign Atmospheric Science Department
​A front is a line drawn on weather maps which represents the approximate dividing position between different types of air masses. More specifically, fronts are often used to help represent an approximate boundary between areas of warmer and colder temperatures. 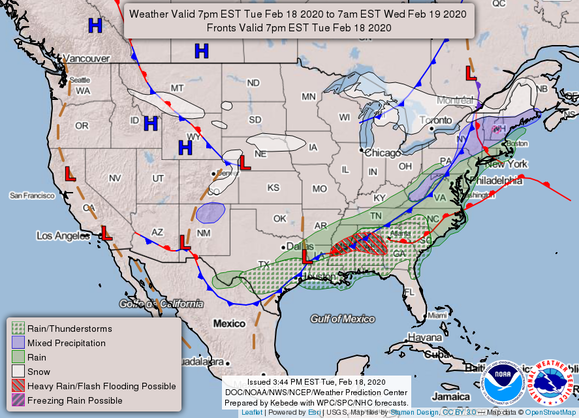 Credit: NOAA NWS Weather Prediction Center
A cold front is an atmospheric feature which gradually brings cooler air into an area. Cold fronts will often act to replace areas of warmer air with colder air or areas of colder air with warmer air.

Credit: ​University of Illinois Urbana-Champaign Atmospheric Science Department
On a weather map, a cold front will always have a blue line with triangles pointing towards the direction in which the cold front is moving. In reality, cold fronts always have wiggles and curves because of localized changes in wind and temperature.
A warm front is an atmospheric feature which acts to replace cooler or colder air with warmer air. On a weather map, a red line with half circles filled in represents a warm front and the direction in which the warm front is moving.

Warm fronts will often bring along somewhat warmer (and often wetter) conditions. As with cold fronts, on weather maps, warm fronts are shown as straight lines, but they are not in fact straight lines as explained above for cold fronts.
A stationary front is an atmospheric feature which represents the boundary between a warm front and cold front but neither front overtakes the other. An alternating line with blue-colored triangles and red-colored half circles on a weather map indicates a stationary front.

Credit: NOAA NWS Weather Prediction Center Surface Analysis Archive
An occluded front is an atmospheric feature which represents any situation when a cold front catches up to the warm front within a given low-pressure system and “overtakes it”. A line with alternating purple-colored triangles and half circles indicates an occluded front.

​​What’s the difference between Fahrenheit and Celsius? 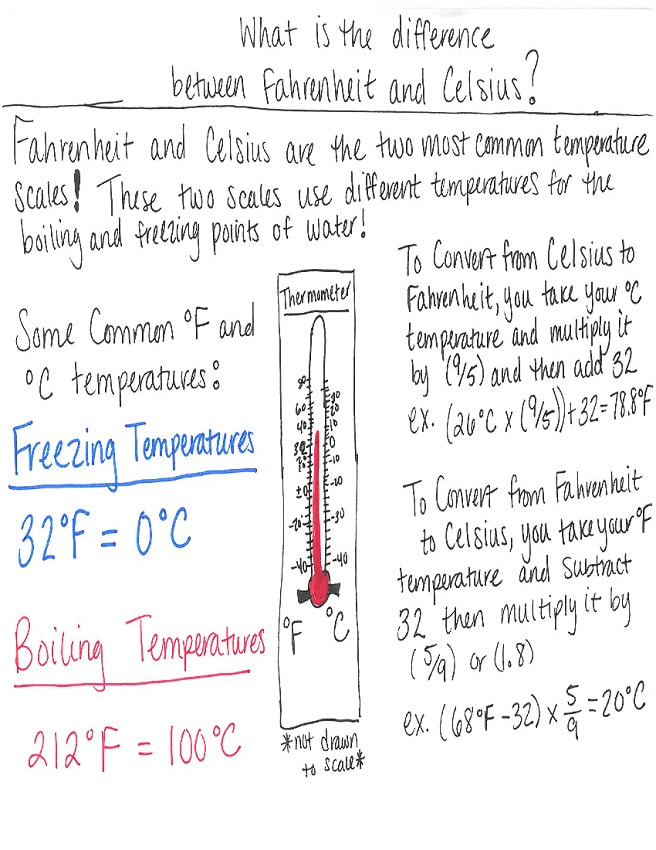 At any point around the globe and at any time, there is always at least some amount of moisture in the air. Whether you are sitting in the middle of the Sahara Desert in late August, if you are approaching the peak of Mount Everest in early February, or if you are on a paddle board over the eastern Mediterranean Sea in mid-July, there will be always be moisture in the air.

​We measure relative humidity to compare how much water is in the air vs. how much water vapor could be in the air. This is very important to know for producing more accurate regional weather forecasts since helps to indicate the likelihood of observing impactful weather events.
​
Credit: National Geographic
Let's Learn about the Water Cycle!
To understand humidity, we must also understand what humidity is most often linked to within Earth's atmosphere. That link is the global water cycle. 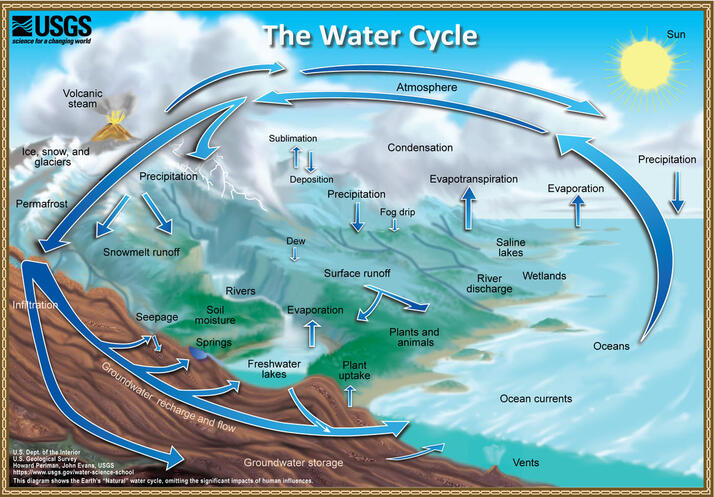 What are different types of precipitation?

Throughout the course of any year, millions of people from around the world end up having to deal with various forms of liquid or frozen precipitation.

The first important fact to understand is that anticipating changes in precipitation types is one of the harder things to do. To understand how such different types of precipitation form is what can help you be more aware and better prepared in your "neck of the woods".

Once clouds form and build up enough moisture, then liquid and/or frozen precipitation can start to form.

Credit: Earth Science Australia
Rain is liquid water falling to Earth from some height in the atmosphere. Since rain reach Earth's surface as a liquid, the temperature through the layer of the atmosphere the rain falls through must be above 32°F.

Credit: Giphy
During the Spring to Summer-time seasons, air temperatures will typically be warmer which will allow the atmosphere to contain greater moisture. With greater moisture available, you can more easily form clouds and thunderstorms under the right conditions. The warmer the lower atmosphere is, the greater the chance for the formation and lifting of ice particles within any thunderstorm. Once ice particles are lifted within a thunderstorm and there is enough liquid water content available within the upper parts of a thunderstorm, then hail stones can often begin to grow. 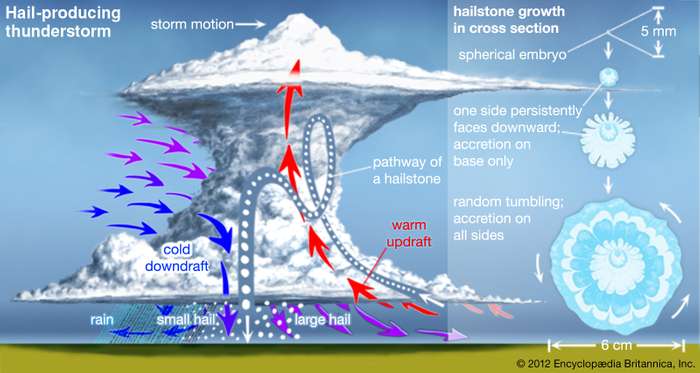 Credit: Encyclopedia Brittanica
As we shift from Fall to the Winter-time season, the focus will typically shift from liquid to frozen precipitation types. One of the more interesting Winter-time precipitation types is snow. Snow is comprised of ice crystals which form within a layer of the atmosphere which has a temperature that is below freezing. For more frozen facts on how snowflakes form, please visit our GWCC snowflake education section.

Credit: Gifer
During the Winter-time, when it comes to predicting icing events (also known as ice storms when they are severe enough), one of the more challenging precipitation types to forecast is sleet. Sleet is somewhat similar to freezing rain except that sleet re-freezes in the air after melting in a warm layer of the atmosphere prior to reaching the surface of the Earth. 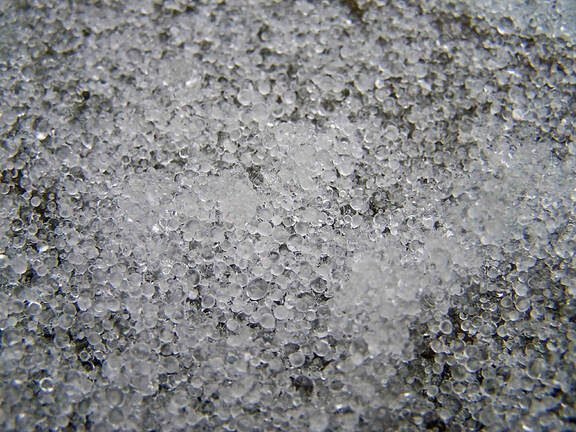 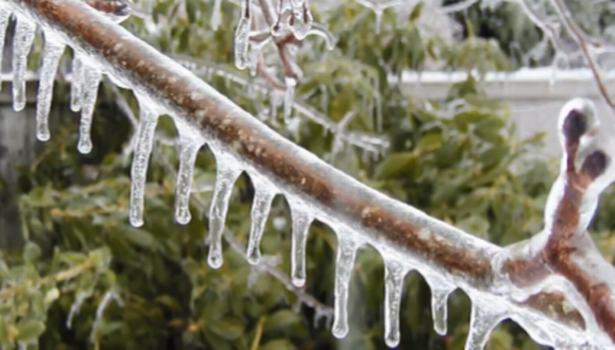 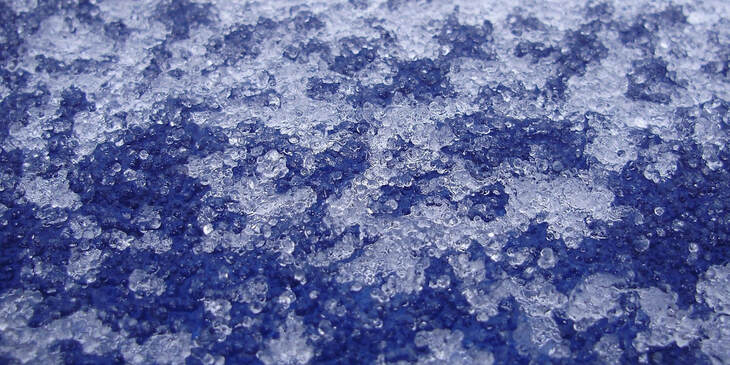 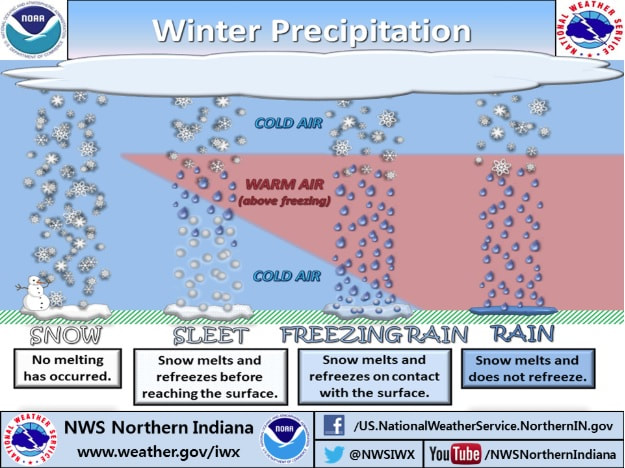 So.. how do clouds form?

How do weather satellites support and improve weather forecasts?